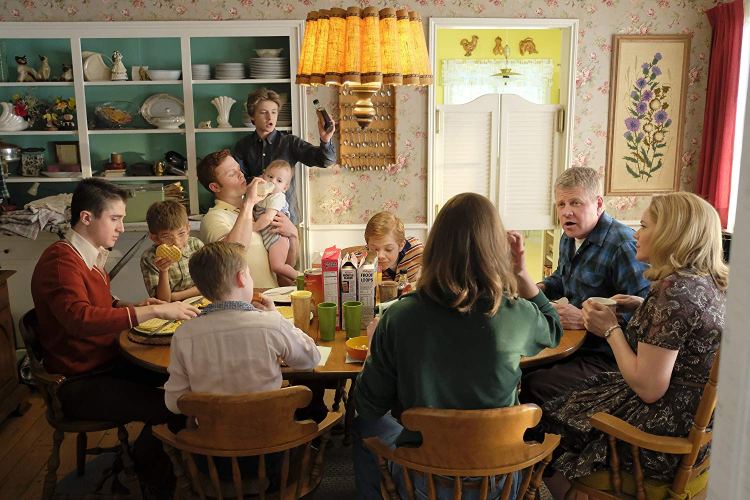 ABC boasts an impressive lineup of family comedies, from Emmy winners such as Blackish and Modern Family, to newcomers like Bless This Mess and Schooled. The network seems to specialize in series that share a slice of American life from unique family perspectives, like the children of Taiwanese immigrants (Fresh Off the Boat) or the family you find in unlikely places (Single Parents).

But the most promising freshman comedy on network TV this year is The Kids Are Alright, based on creator Tim Doyle’s 1970s upbringing in a crowded Irish-Catholic household.

Audiences follow Timmy Cleary (Jack Gore) and his seven brothers growing up in suburban Los Angeles. Doyle narrates in the present day, looking back on his childhood ambitions to make it big in show business – and the reluctant audience he found in his ever-growing family.

Mary McCormack and Michael Cudlitz anchor the show as Peggy and Mike Cleary, rough-around-the-edges parents who love their kids but don’t always like them. They’re far from stereotypical, though Mike is a brusque veteran who works nine to five and Peggy is a homemaker specializing in boxed dinners and hand-me-downs.

Despite its large ensemble, each brother maintains consistent qualities we can find in our own families: the brown-nose, the bookworm, the troublemaker and the lovable doofus. But these characters never feel like they’re fulfilling one-dimensional roles. The first season expertly balanced and developed their quirks, while remaining incredibly fast and funny.

Doyle and his writers nail the Irish-Catholic lifestyle, and the references to The Waltons and Rodney Dangerfield are delightful for fans of television in that era. Thanks to Cudlitz’s dry delivery, McCormack’s snappy comebacks and a strong cast of sons, The Kids Are Alright manages to be sincere without being sentimental. It has all the middle-class humor of The Middle with the heart of The Wonder Years, but is carving out a tone of its own. The Clearys go to church on Sundays because that’s what they’re supposed to do – but they’re also Dodger fans who watch Carson and mercilessly mock other families on the block. They’re the sort of family that reuses melted birthday candles and talks all through Sunday Mass – the sort of family you don’t really see enough on TV.

Mark Hamill, who made headlines last spring for his pleas to save Brooklyn Nine-Nine from cancellation, tweeted in support of the series: “As one of seven kids from a Catholic family I might be biased, but funny is funny and everyone who sees it comes away a confirmed fan. It’s more than ‘alright’ – it’s the best family comedy in years!”

The ABC comedy lineup is almost as crowded as the Clearys’ dining room during dinner, with an equally hilarious and diverse blend of perspectives. The Kids Are Alright deserves a spot at the table.

This piece was originally published on The Simple Cinephile and is posted here with permission.