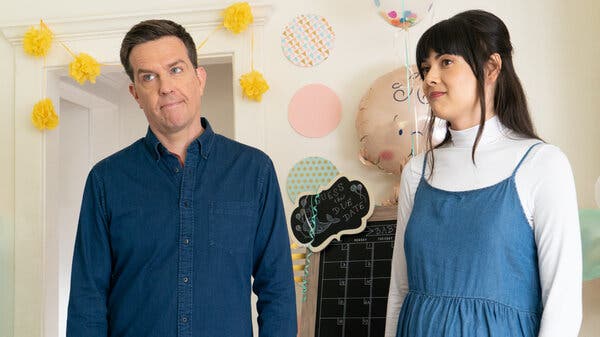 Ed Helms and Patti Harrison play a single expectant father and his pregnant surrogate in “Together Together,” a Bleecker Street film that hits theaters April 23. Writer-director Nicole Beckwith’s refreshingly real feature tackles the stigma of singlehood – and the unlikely places we find family.

App developer Matt (Helms) meets Anna (Harrison) while interviewing potential candidates to carry his child. It is immediately clear that Matt is unique, telling the rarely-depicted story of a single dad who chooses parenthood, rather than having it thrust upon him by tragic or comic circumstances.

Their awkward and unconventional exchanges begin from the opening scene, and never really waiver throughout nine months and 90 minutes.

Beckwith covers the ground of exposition effortlessly, allowing the audience to simply watch an unlikely friendship unfold organically – if somewhat awkwardly, considering the circumstances. As we travel with these two people throughout the pregnancy, their reliance on each other evolves into a solid and surprising friendship. But as Anna’s very funny coffee shop co-worker Jules (Julio Torres) expresses, their relationship has an end date, which leads both of them to question what this moment in time means – and whether it’s even ethical.

Both actors have experience in the art of dry comedy: Helms on “The Office” and Harrison in two seasons of Hulu’s “Shrill.” Their onscreen friendship never feels artificial or saccharine, thanks to quippy, smart dialogue that feels authentic.

But it’s more than their chemistry and delivery that make “Together Together” special – it’s the simple fact that they sound like real people having real conversations, about life, career, dating and the choices that have defined who they are. The real love that grows between them is refreshingly free of melodrama, and their genuine characters are never sacrificed for plot.

In addition to its uniquely platonic protagonists, “Together Together” is better than most expectant-parent films because it focuses more on the people than the process of pregnancy. It portrays two people of different generations and genders, who refuse to be bogged down by the stigma of singlehood at the various stages of their lives. While Anna’s family shut her out in her teen years and she seeks the chance to start fresh, Matt’s friends and family question his decision to pursue single fatherhood. What others see as “being alone,” they see as the path that makes sense to them. And God, is it good to see that portrayed onscreen in a new way.

Matt’s expression of confidence feels like a beacon to Anna, and the audience: “It’s weird to be perceived as hopeless in this moment, when I’m actually incredibly hopeful.”

Beckwith’s second theatrical feature film brings Matt’s hope and Anna’s humor to people who might have to take an unconventional route to finding family – biological or otherwise.

“Together Together” will be available to watch on VOD and digital platforms May 11.