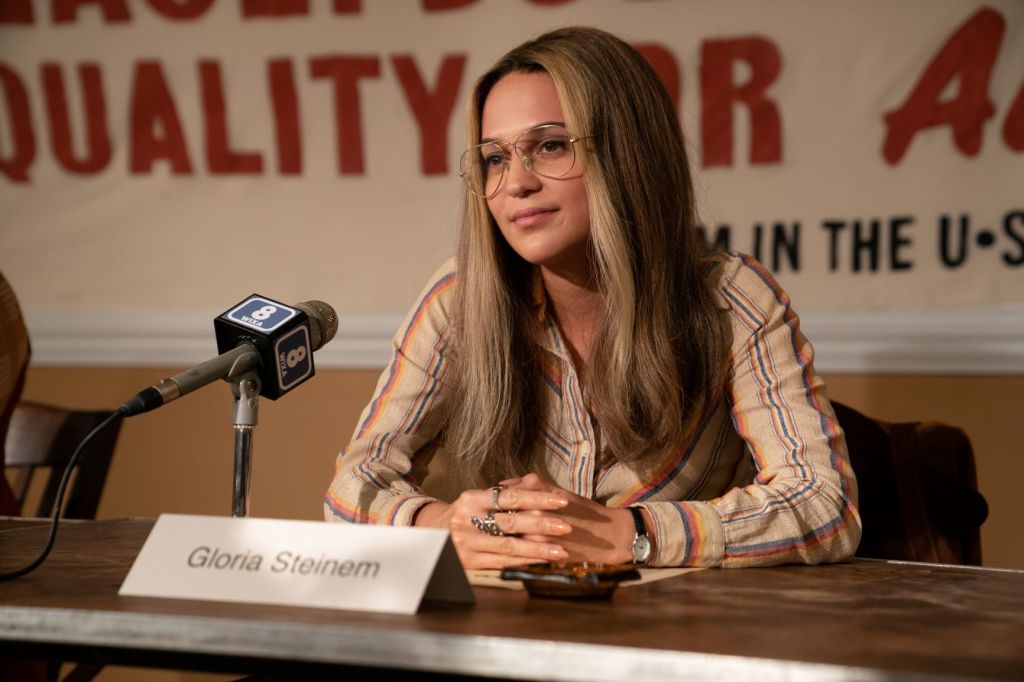 From writer-director Julie Taymor, the ambitious new film The Glorias follows the life of iconic feminist Gloria Steinem. Based on Steinem’s writing, the film intertwines different eras of the subject’s life, connecting the dots that led her to becoming the public figure, activist and writer we know today.

Four actors play Gloria at various stages of her evolution. Alicia Vikander and Julianne Moore play versions of Steinem as she evolves into the familiar figure of a trailblazing women’s rights advocate who famously echoed the Irinna Dunn sentiment: “A woman needs a man like a fish needs a bicycle.”

Ryan Keira Armstrong and Lulu Wilson round out the younger cast, creating some of the more touching aspects of the film when the older Gloria sits down next to her younger self on a moving bus. These surreal moments resonate with the parts of us that wish we could sit down beside our younger selves and take them by the hand, to let them know what’s coming.

Director Taymor brings the same imagination she brought to Across the Universe, keeping The Glorias from being a straightforward biopic – along with a lack of chronological narrative. With the help of debut screenwriter Sarah Ruhl, Taymor brings us inside the life of Gloria the person – not the public figure, not the activist, but the human being.

When people are “icons” they’re often viewed as less than real people. It’s easy to forget that life decisions and hard events shaped the person who would become Gloria Steinem. The film reminds us that the arc of a person’s life is rarely straightforward. From her small house with a sick mother who never fulfilled her journalistic dreams, to a crowded train in India, to graduating Smith College and becoming a young writer assigned to the fashion and dating beat, we follow her. When a male editor critiques her approach to a story, she retorts: “You didn’t say it had to be symmetrical.” Taymor’s story is far from symmetrical, but when it works, it’s an important watch. A portrait of a woman who has lived a full and fascinating life, if the film at times drifts in and out of being fascinating.

As spot-on as Moore’s portrayal is as the women’s movement takes off and Ms. Magazine finds an audience, the most inspiring and interesting moments of The Glorias belong to Vikander: when we see how she learned to find her voice – how much she had to learn before she knew how to speak up, and what to say. Though it might seem like it, she didn’t find it overnight – she wasn’t born with certainty. This film proves how her young life informed her later work, and the chronicles events that planted the seeds which led to her life’s message.

Women everywhere can be thankful for Gloria’s journey – after the loss of Ruth Bader Ginsburg and the disturbing political climate, her work for women needs to be remembered. Her life needs to be celebrated.

Roadside Attractions and LD Entertainment will release THE GLORIAS on Digital and Streaming Exclusively on Prime Video Sept. 30.

Begin typing your search above and press return to search. Press Esc to cancel.